Comparative analysis of the claims incurred and borne by the CCS due to major floods: the relative weight of cut-off lows

In this article, we aim to see whether this perception has a factual basis by looking at the compensation paid out by CCS in what are referred to as the most significant floods. The reason for selecting only these more major events, the criteria for which will be explained further on, is straightforward: performing a detailed analysis of all the claims incurred per flood to classify them according to their meteorological origin far exceeds the scope of this article, so we shall confine ourselves to this small number which are nevertheless the floods that have made the largest economic impact.

In the past 24 years (the 1995–2018 dataset), CCS bore the following loss rates per flood (excluding coastal flood and the effects of wave battering): as regards damage to property —damage to assets and pecuniary loss—, it handled 546,212 claims procedures and both paid and provisioned for a total of 3,431,289,982 euros (in nominal terms), which works out at an average cost per claims procedure of 6,282 euros. If this amount is adjusted for inflation using the relevant annual CPI changes, this gives us a restated total of 4,074,590,394 as of 31 December 2018, implying an average cost per claims procedure of 7,460 euros. These figures can be compared with the CCS publication “Extraordinary Risk Statistics for the 1971-2018 dataset” (Estadística de Riesgos Extraordinarios, Serie 1971-2018).

With respect to bodily injury, for this period from 1995 to 2018, CCS has paid out flood compensation for 157 victims (including injured persons and the deceased). The economic figures are not referred to here because, given that they depend on the sums assured in accident and life/risk policies taken out for each victim, these are not significant and can vary considerably case by case.

All the data, unless otherwise indicated, shows the situation as of 30 October 2019 and features files for claims reported and not rejected.

Defining what one should understand by a “significant event” is not always easy to do. It stands to reason that the essential elements here were: (i) consecutive days of suffering the impact and separating out the various different phenomena, (ii) the geographical zone, which can either be very extensive or highly localised, depending on the circumstances, and (iii) the economic sums, which have to be particularly relevant.

After picking out the significant events, the victims suffering bodily injury associated with them were taken out.

This means that the event which took place in Biescas (Huesca) on 7 August 1996 does not figure as a selected event, since the property damage was not substantial, although loss involving bodily injury actually was (CCS paid out compensation for 49 victims, mostly dead persons).

Events have been sorted into two groups: those where the meteorological origin concerns an upper-level cut-off low (COL) and those which are caused by some other factor (depressions which reach the surface, the typical low-pressure areas/storms or floods that convective phenomena over a wider or a smaller area bring about, labelled as NON-COL). They have been studied, analysed and compared with the intention of concluding what the most noteworthy differences between both types of origin are in terms of loss or damage.

The most significant events chosen were the following:

Therefore, out of total compensation caused by flooding (coastal flood excluded) arising in the series referred to, total significant events accounted for 39% of damage to property and 27% of victims. Of this 39% of the total paid in compensation over this 24-year period in relation to the most significant events, 72% of total loss or damage and 63% of the total for victims were due to cut-off lows, which seems to corroborate the initial impression.

We now go on to examine and compare the two types of events (the economic figures are restated to inflation-adjusted euros), while distinguishing between damage to property and personal injury.

In relation to damage to property, and always confining ourselves to these particularly significant events, the average event caused by cut-off lows is more costly (50 million euros) than the average flood event attributable to any other phenomenon (35 million euros). The major floods which cut-off lows cause also give rise to a greater number of claims (at approximately 6,000) than those brought about by any other type (approximately 2,400). The combination of both factors, average cost per event and number of claims per event means, however, that the average cost per claim in the case of non cut-off low events is higher than for cut-off low events (14,600 euros compared to 8,600 euros, respectively). The reason can be inferred from the tables and charts in Figure 1. 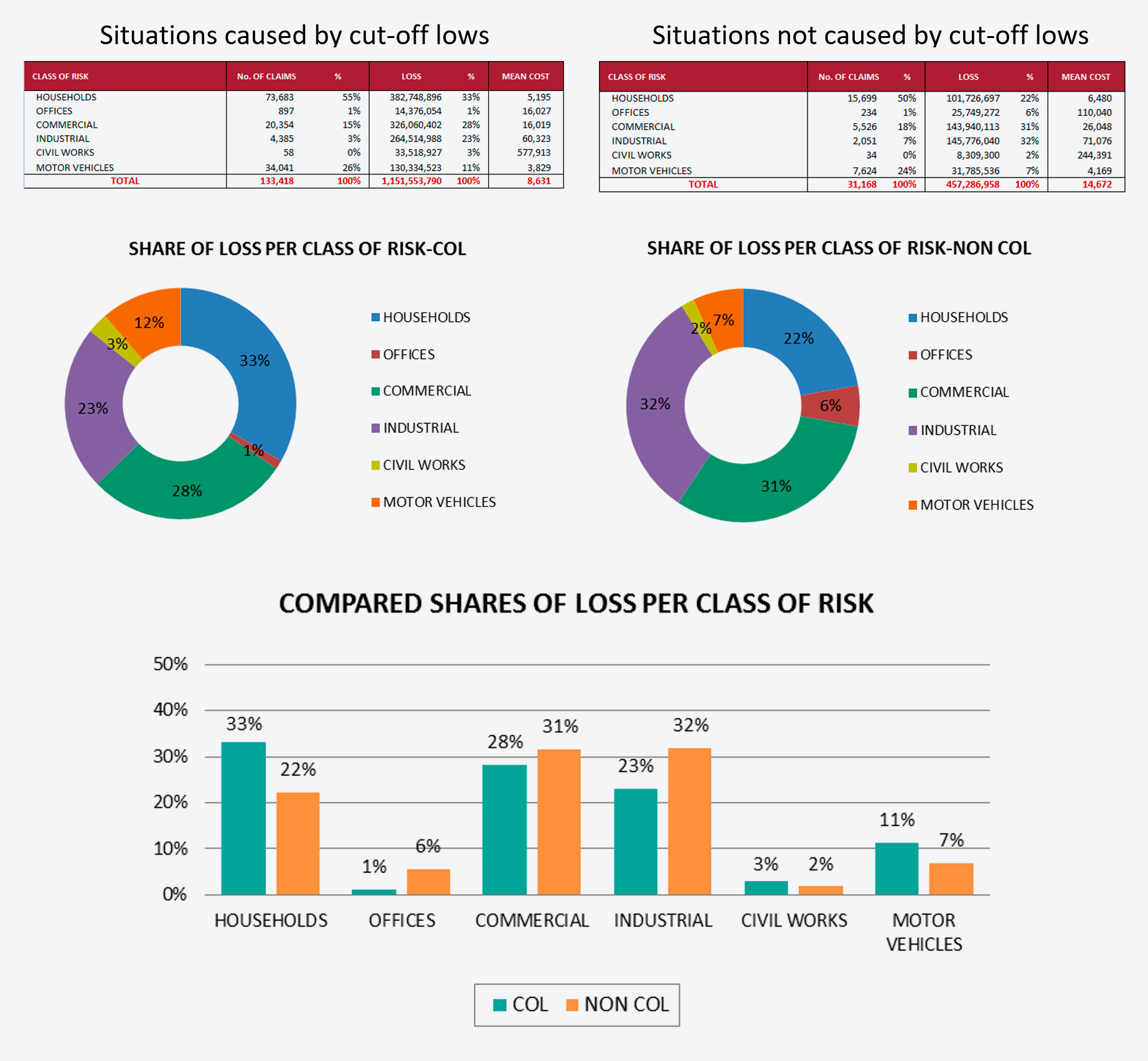 Figure 1. Comparison of cost and claims of CCS compensation pay-outs for damage to property in the most significant situations from 1995 to 2018 for those events originating from a cut-off low and those not being so.

Besides the uneven distribution of claims by class of risk, it can be seen that their average cost is always lower in the case of cut-off lows compared to the same class of risk for events not originating from cut-off lows, with the exception of civil engineering work, which is not very significant in relative terms.

If the study of damage to property which has been compensated by the CCS in these particularly impactful situations is broken down into compensation bands, the conclusions (which feature in Figure 2) are similar: there is a deviation among situations that were not caused by cut-off lows towards more costly loss events. 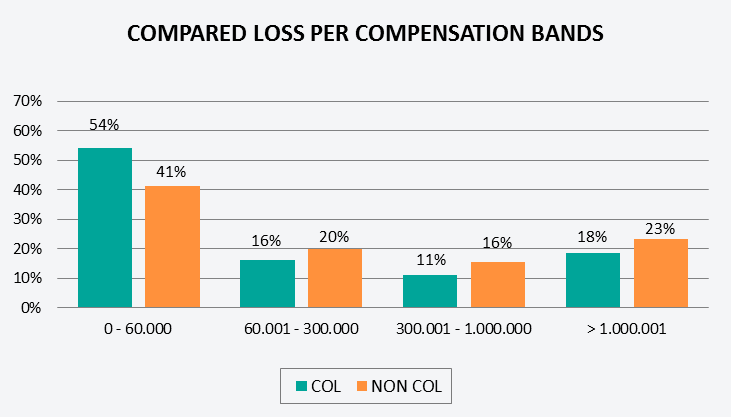 We now move on to examination of the geographical distribution of these two kinds of major flood events. The maps showing the distribution by province of statistically significant deviations relative to the mean for events (Figure 3) leave very little doubt that events caused by cut-off lows produce damage in coastal zones, most particularly, on the Mediterranean shoreline. Nonetheless, those due to other causes are fundamentally located in the more westerly areas of the country, the Bay of Biscay (major low-pressure areas or very active front movement) or along the line of the Ebro as a result of flooding of this river. It is worth reiterating at this juncture that we are only referring to a small number of events, which are those that involve a larger sum or greater impact, for which reason, we lose track of storms or other more localised convective phenomena, but, even so, the resulting distribution offers quite a good illustration of the different nature of both types of events.

Figure 3. Distribution by province of the higher relative frequency of major floods brought about by cut-off lows or by other causes.

If we aggregate the information on total damage caused by these more significant events by regions, the result shown in Figure 4 emerges, where it can be seen that out of the combined group of more significant floods, all those in the regions of Murcia, Catalonia, the Balearic Islands and even the Canary Islands were caused by cut-off lows. Likewise, a very high percentage of the most significant floods in the Valencian Region were attributable to this cause. On the other hand, all of the most substantial episodes in this past quarter of a century in Galicia, Extremadura or Aragon, as well as the largest percentage of those in Andalusia, the Basque Country and Asturias, were due to a different cause. 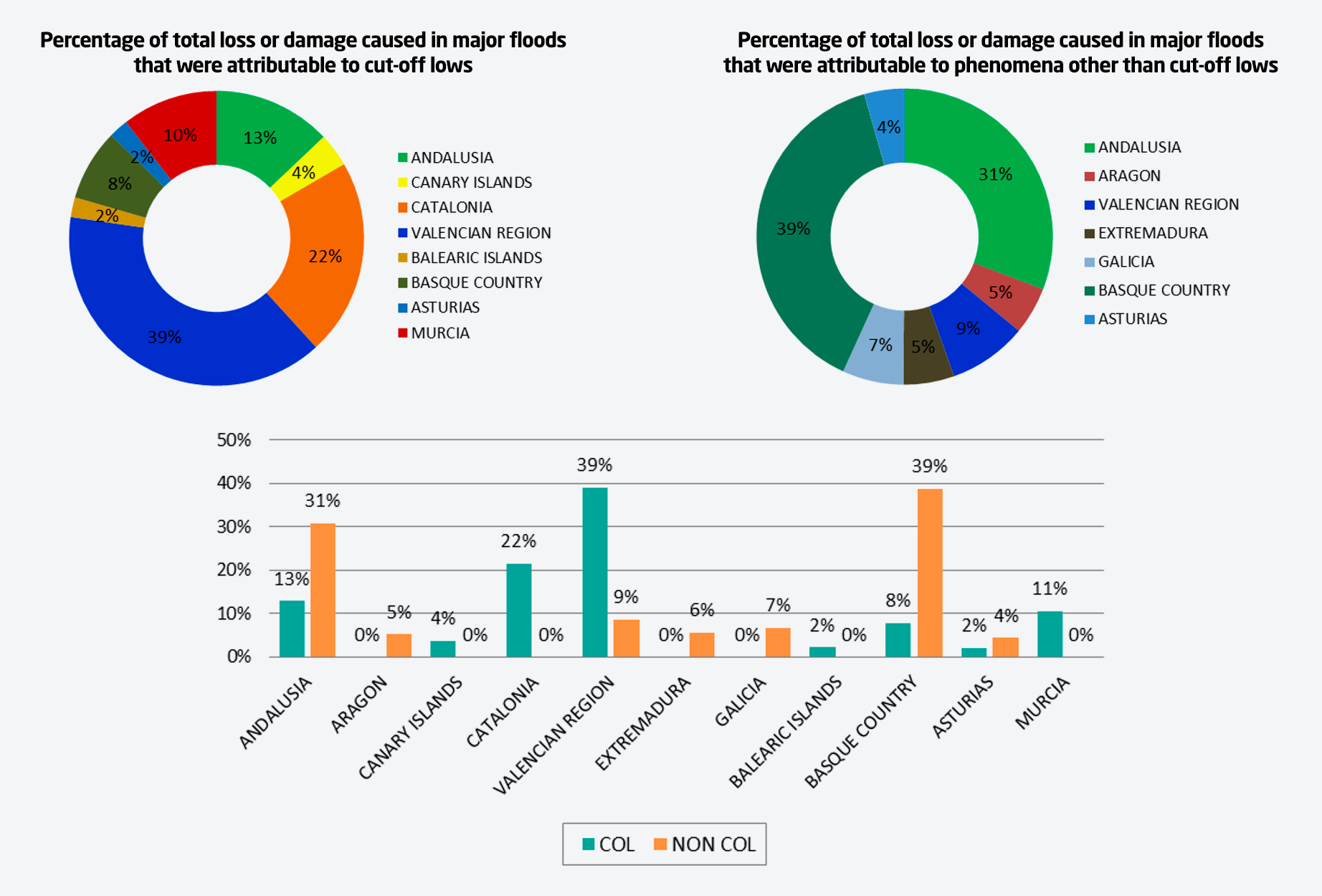 Figure 4. Percentage out of the total of CCS compensation pay-outs for the most significant floods caused by cut-off lows or other atmospheric phenomena in 1995 2018 by region.

With regard to the time distribution, if groupings are made of the sums paid out in compensation by month of occurrence for this collection of events, one can also see a clear skew of cut-off low situations towards September and October (together, representing 73% of the total), while most of the loss or damage (58%) attributable to situations with other origins happens in months in late autumn or winter, although, as is to be expected given the assorted nature of potential origins, these are also more broadly distributed over the course of the year. 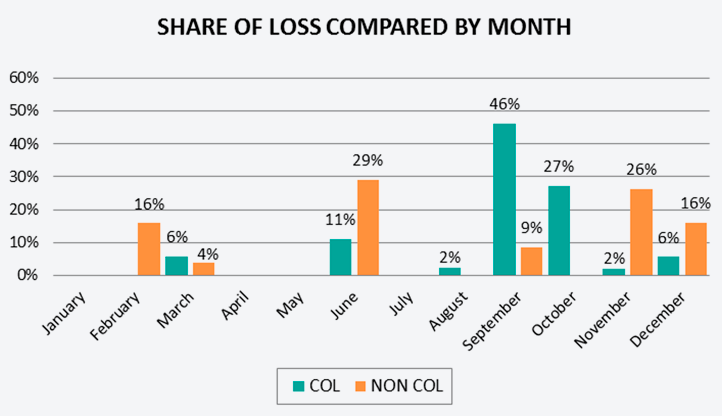 Figure 5. Monthly distribution of total CCS compensation pay-outs for the most significant floods caused by cut-off lows or other atmospheric phenomena in 1995 2018.

If we look at personal injury, the average number of victims compensated by the CCS is identical, both for more impactful situations caused by cut-off lows and those originating from other sources: 1.2 victims per event.

The situation that has motivated this study, as well as this edition of the magazine, is the flood event prompted by the cut-off low which mainly affected the south-eastern quadrant of the Iberian Peninsula from 10 to 15 September 2019. As of 11 December 2019, the total estimated amount at stake from this loss event is 505.6 million euros across a total of 67,531 compensation claims logged by the CCS. This is the flood-related loss event with the highest number of claims in the history of the CCS and the second highest in terms of the economic sum involved on record, and of course it far exceeds any of the major flood events included in the study period reviewed in this paper, which is from 1995 to 2018. As may be seen from Figure 6, some 91% of the damage or loss estimated by the CCS is spread between Murcia Region and the Valencian Region (mostly in the province of Alicante). Comparing the loss profile by risk class (Figure 6, bottom left) with the average profile (1995-2018) for significant situations produced by cut-off lows (Figure 1, centre left), in this case, the damage to households was greater than on average (39% compared to 33%), lower for businesses (21% compared to 28%), lower for industries (17% against 23%) and higher for vehicles (17% compared to 11%) and civil engineering work (5% compared to 3%). What is really extraordinary about this case was the number of claims, which was over ten times higher than for the average significant cut-off low event, and the total cost, which was ten times more than for the average significant cut-off low event. Nonetheless, the average cost per claim, of 7,487 euros, fits in quite well with the average for significant cut-off lows of 8,631 euros, which will be an even better fit when claims registered and not rejected are considered rather than mere registered claims. On top of this, in this event, the CCS received claims for bodily injury to 18 victims. 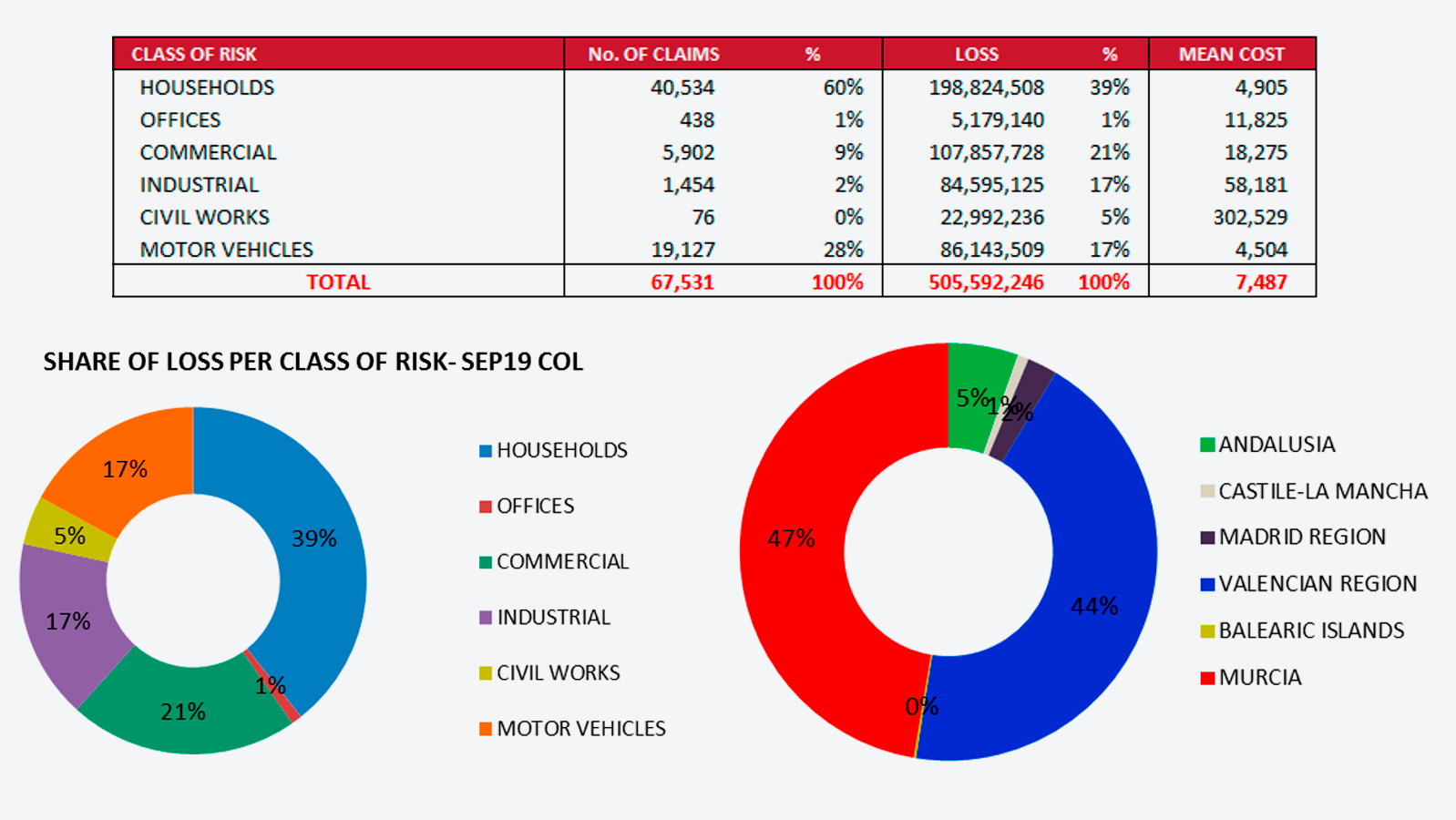 After this event there was another cut-off low generated flood in October 2019 in Catalonia, which gave rise to 5,800 claims for compensation from the CCS, with a total estimated cost of 60 million euros. In view of the average figures for 1995-2018, this event could be considered as a significant cut-off low event very much in line with average values.

To conclude, upper-level cut-off lows, which have a bigger impact on the peninsula’s Mediterranean coast in late summer and early autumn, are the events that are responsible for the lion’s share of most significant flood situations and are the cause behind two out of every three euros paid out in compensation by the CCS in these major flood loss events.
The situation that has motivated this study, as well as this edition of the magazine, is the flood event prompted by the cut-off low which mainly affected the south-eastern quadrant of the Iberian Peninsula from 10 to 15 September 2019. As of 11 December 2019, the total estimated amount at stake from this loss event is 505.6 million euros across a total of 67,531 compensation claims logged by the CCS. This is the flood-related loss event with the highest number of claims in the history of the CCS and the second highest in terms of the economic sum involved on record, and of course it far exceeds any of the major flood events included in the study period reviewed in this paper, which is from 1995 to 2018.