The IBER model and its application to flood studying

David López Gómez - PhD in Civil Engineering, Centre for Hydrographic Studies, CEDEX
Juan J. Rebollo Cillán - PhD in Civil Engineering, Centre for Hydrographic Studies, CEDEX
During river floods, the volume of water passing through the water course increases to the point where it overflows its main channel and encroaches onto flood plains. While the flow of water remains confined to the main channel, one-dimensional models manage to describe the movement of the water sufficiently well, meaning that they allow us to know the depth and velocity of the water over the river’s main course. Yet after the waters have encroached onto the flood plains, the flow becomes two-dimensional, which implies that the direction of the water no longer follows the course of the main channel and can instead move in any direction depending on the topography and any obstacles which overflows find in their path, which means that flood events should be analysed using two-dimensional models. 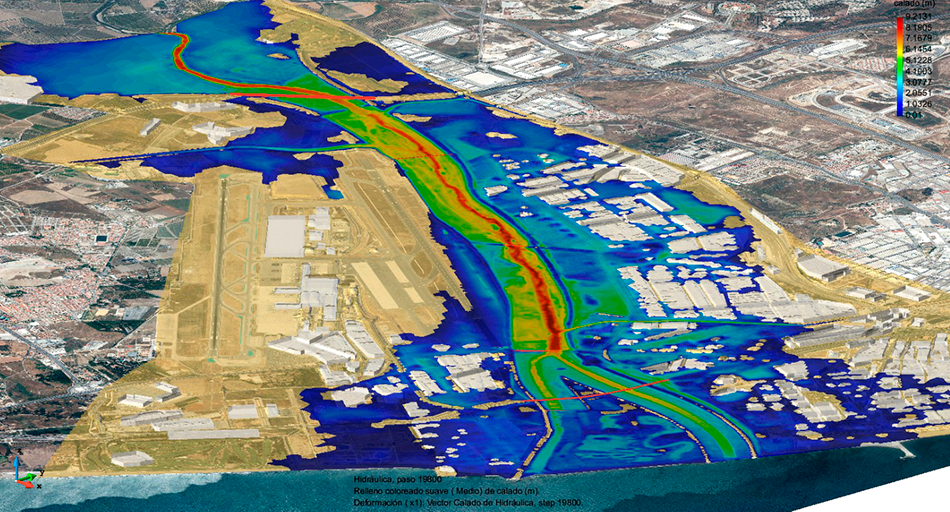 The Iber model, which takes its name from the Latin root for the river Ebro, in turn lending its name to the Iberian peninsula, has been developed by Spanish institutions spread across various different points of Spain’s geography: specifically, the Polytechnic University of Catalonia, the University of A Coruña, the International Centre for Numerical Methods in Engineering (CIMNE) and the Centre for Studies and Experimentation of Public Works (CEDEX), with funding from the Directorate General for Water.

One of the advantages of the Iber model is that it is a freely downloadable software, which has facilitated its use by both consulting firms and public administrations, thus smoothing interaction among the various different actors involved. This software has also been popular throughout academia, with a large number of users in Europe and Latin America. This has been helped by the fact that it can be configured to run in Spanish or English.

The executable installation files can be downloaded from the website at www.iberaula.es, where instructional material can also be found, featuring manuals, examples and tutorial videos, which can prove very useful for learning purposes. There is also quite an active forum where you can post queries and make contributions. Information on both attended and online courses can be also found.

The Iber numerical engine is the FORTRAN F90 code, which solves 2D depth-integrated Navier Stokes equations for shallow waters, known as Saint Venant or 2D shallow water equations, with turbulent closure equations and in a variable system. To solve these equations the numerical finite volume method is used. Iber uses an explicit upwind-type numerical scheme. Of the various different numerical schemes that exist, this is the one which is best-suited to two-dimensional flows on a free surface, as it can solve wave front and system change problems without calculation devices.

Iber has tools that allow models to be generated and results to be analysed within the same computer application. We could say that Iber is encapsulated within the GiD graphics environment (www.gidhome.com), which offers pre-processing and post-processing utilities. GiD has been developed to define and prepare the data that makes up a numerical simulation, as well as to visualise the results of this. Data creation implies defining the geometry of the problem and assigning the information to the geometry that is required to generate the internal files which Iber’s numerical engine needs for execution. GiD has a CAD engine that enables new geometries to be created or imported from other CAD systems for subsequent fitting. The program also makes it possible to generate a grid and transfer the data associated with their geometry.

All calculations are carried out on a three-dimensional grid that reproduces the geometry of the watercourse. The elements of the grid serve to define the finite volumes upon which calculation is performed. Iber can calculate in relation to structured and unstructured mesh elements, be they triangular or quadrilateral in shape.

Post-processing consists of viewing the results in a way that makes them easy to interpret, for which purpose displays can be made using colours, level curves, labels, vectors, graphics, animations, etc.