This is the first issue of the digital magazine CONSORSEGUROS and its publication marks a new way for the Consorcio de Compensación de Seguros to show its presence within the wider context of Spanish and international insurance.
This new arrival coincides with the sixtieth anniversary of the creation of the Consorcio de Compensación de Seguros back in 1954. It was set up as a permanent and consolidated vehicle to administer an insurance solution for catastrophe risks having passed through a provisional period as a mechanism authorised in 1941, in order to contribute to dealing with the compensation-related responsibilities of the insurance market arising from loss in the Spanish Civil War. Sixty years in which, in performing each of the duties which have over time been allocated to it in different aspects of insurance, the CCS has remained faithful to its calling as a vehicle serving the insurance sector and Spanish society in general.
Within a wider context the appearance of CONSORSEGUROS also coincides with an era in which the aspects associated with a comprehensive approach to handling natural catastrophes, including funding and therefore insurance, are taking an international significance of primary importance and have climbed to the top of the agenda of many international organisations and institutions. This is surely because the concentration of people and wealth into vulnerable areas means that the damage caused by natural catastrophes is reaching worrying levels, exhibiting a markedly rising trend which could seriously compromise the development of human communities. As a case in point, under the presidency of Mexico in 2012, G20 included issues on its agenda relating to catastrophes in aspects such as risk assessment, mitigation, financing, stepping up resilience and reconstruction. In conjunction with the World Bank and the OECD the G20 conducted analyses and formulated proposals for action for countries in this area.
These are matters which have also been a cause for concern within the European Union for some time now, which has led to certain far-reaching initiatives in several fields. The Flood Directive, for example, represents a landmark in regulating action taken with regard to this risk and is binding on all member states. Also significantly important is European Commission’s green paper published in April 2013 on insuring natural and anthropogenic catastrophes in a bid to incentivise solutions in European countries.
A whole raft of initiatives are thus moving ahead across the world centring on managing natural catastrophes and possible insurance solutions for them. And all this, as one might expect, is of the utmost interest for an entity such as the CCS, which has built up a wealth of experience in this area throughout its history and notable standing among the systems covering catastrophe risk. Nevertheless, one should point out that in publishing this new magazine the CCS does not seek to fill any gaps in the specialist literature. Rather it aims to contribute food for thought and sometimes (and why not?) its own viewpoint regarding the aforementioned issues that are taking on a growing importance, particularly in a context in which climate change is adding to factors that carry a lot of weight in discussion of these matters.
Yet the activities of the CCS do not all fall under the heading of natural catastrophes It is a multifunctional entity with responsibilities on other areas of insurance, such as those concerning the agricultural sector, motor vehicle liability, export credit insurance on behalf of the State, or the winding up of insurance companies, among other things. The CCS has a great deal of experience in these matters and can contribute ideas for consideration.
Our wish is for this magazine to be a platform for channelling contributions in the debate on matters concerning all the fields of insurance in which the CCS pursues its activities.
María Flavia Rodríguez-Ponga Salamanca
Director General of Insurance and Pension Funds
Chairwoman of the Consorcio de Compensación de Seguros 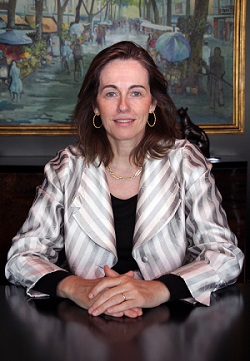 Our wish is for this magazine to be a platform for channelling contributions in the debate on matters concerning all the fields of insurance in which the CCS pursues its activities.