From an international company’s standpoint, the world of risks and their cover constitute a true challenge of complex management. There is a wide variety of risks to take into account, affecting a multiplicity of exposures of diverse significance (strategic and economic) and which in turn are located in various countries where, moreover, insurance solutions are not homogeneous. Aspects related to natural risk coverage are a category for special consideration in this management.


That the effect of natural risks on human activity and in business is an aspect increasingly forming part of people’s concerns is a conclusion which seems quite evident to any reader, illustrated by their ever more common appearance in the media over recent years.

A less intuitive and better founded analysis of this concern over natural risks is to be found in the results of the Report on “2015 Global Risks” published by the World Economic Forum at the time of the meeting in Davos (Switzerland) in January.

That report defines a map with the 28 main global risks, classified into 5 groups (economic, environmental, geopolitical, social and technological), evaluated according to the level of concern they create, the likelihood of their occurrence, their impact, and possible connections between them.

Among the 28 risks analysed, in the group of environmental risks, the report highlights in second place in terms of high probability, extreme climatic events (floods, storms, etc.) and in fifth place for their potential impact, a failure to adapt to climate change. Inevitably too, in a relevant position, the risks of major natural catastrophes (earthquakes, tsunamis, geomagnetic storms, etc.) stand out. In this year’s edition of the report, geopolitical risks are the most notable, the result of various international conflicts.

Although 2014 turned out to be a favourable year in terms of natural incidents, as pointed out by Swiss Re Sigma in recently published preliminary figures, in all there were 29 billion dollars in insured natural losses (compared with 37 billion the previous year and an average of 57 billion in the last 10 years). Of these, the following were the main events recorded:

A grasp of the dispersal and variety of such events around the world can be found in publications on the occurrence and impact (economic and insured) of catastrophes in successive years, published periodically by the world’s main reinsurers and brokers.

Whatever the case, it is clear that any prudent globally-engaged company must take account of all risks which may affect the achievement of its objectives, and those related to nature cannot be ignored in defining its risk map.

In fact, an organisation’s various activities imply risks, making it important to develop formal mechanisms allowing them to be managed actively, including their identification, prioritisation and the implementation of the related mitigation policies (understood to be actions which influence the level of impact of a risk, the likelihood that it will occur, or both simultaneously).

In this sense, the unforeseeable character of natural risks (catastrophe models notwithstanding) does not in any way mean their active management should be abandoned but rather that, in my opinion (and also apparently in the opinion of the insurers themselves as will be seen), risk management must be used even more rigorously.

2. How can natural risk management be developed?


As already mentioned, any adequate management of a company’s risks must also extend to natural risks.

Despite the fact that there are other valid risk management models (COSO II…) our analysis of natural risks is developed in the context of work and the process of management of the risk described in ISO 31.000.

Because of limited space, this analysis focuses on the phases of Appraisal (including the three main components of this phase – Identification, Analysis and Evaluation of the risk) and on Treatment of the risk.

2.1. Identification of the Risk

Identification of the risk is a key element in any risk management model. This stage, as provided for in ISO 31.000 itself, is a process to reveal, recognise and register the risks. In this case and in relation to the natural risks dealt with here, this is done both by Risk Audits performed by our Corporate Management for Security and Environment Audit and by the Insurance Management.

The latter are completed by company engineers collaborating with specialists from brokers and the main insurers, exhaustively and systematically identifying the natural risks which may affect that facility because of its geographical location, including earthquake, hurricane, tsunami and other risks. This is done using tools that are available on the market, such as seismic and flood maps, industry statistics, etc.  Here it must be emphasised that, while it is important to perform audits in plants in operation, this is much more so in the case of those still in the design and construction phase, in order to propose and implement possible physical recommendations to improve the risk at the initial stage of the project.

Then, naturally, the risks identified are placed in the Company’s Global Risks Map.


This phase aims to understand the risk previously identified and obtain elements of analysis for subsequent decision-making on its treatment. This makes it necessary to be able to value the possible impact of natural risks and the probability that they will occur (which should in principle be low save for the most recurrent natural risks such as hurricane in the Gulf of Mexico, the El Niño phenomenon in Peru, etc.).

Thus, those risk audits also calculate the figures for maximum losses estimated for each of the natural risks identified for this situation or, at least, for the main ones.

In addition, and in the case of countries with a diversity of activities and installations, an analysis must also be made of the possible accumulation of risk for all the facilities exposed. This is normally done with models available on the market, such as RMS, AIR Worldwide, EQECAT etc.

It is known that activity related to catastrophe models has grown significantly in recent years, with estimated turnover of some 500 million dollars per annum, giving an approximate idea of the importance this type of model has taken on in industry.

It is important on this question to point to the relevance of being able to draw on individualised data on risks and installations, including details of the physical coordinates, construction characteristics, value in risk exposed (including loss of profit as applicable) making it possible to model the aggregated exposures adequately.

However, is it possible to model and predict natural risks? In my opinion, scientific and technological development of weather-forecasting has made it possible to issue reasonably exact predictions relatively short-term (3 - 5 days). Natural risk prediction becomes less accurate as the prediction’s lead time increases. Moreover, seasonal scenarios issued as seasons begin (e.g. for hurricanes), give overall estimates of the total quantity foreseen for this category of catastrophe in an area but are unable to provide data on either when or where they will occur.

A demonstration of the difficulty in predicting such natural risks is seen in the constant revision and updating of models by those supplying them where, in general, it is seen that in cases of catastrophes, the real outcome is always more than was obtained with the models.

In addition, in relation to risks of loss of profit, it is usually difficult to model the risks relating to suppliers and clients (often because of the lack of detailed information on the place where the supplies or products are processed, as the case may be).


Evaluation implies comparing risks appraised in the previous phases with the risk criteria defined in the context, making decisions in a variety of fields such as which risk must be dealt with, which is in any case unacceptable,  to prioritise treatment of various risks, etc.

To facilitate this analysis, it is common to represent the range of natural risks graphically, classified according to risk level, their probability and the possibilities to control or mitigate, as in the following graph: 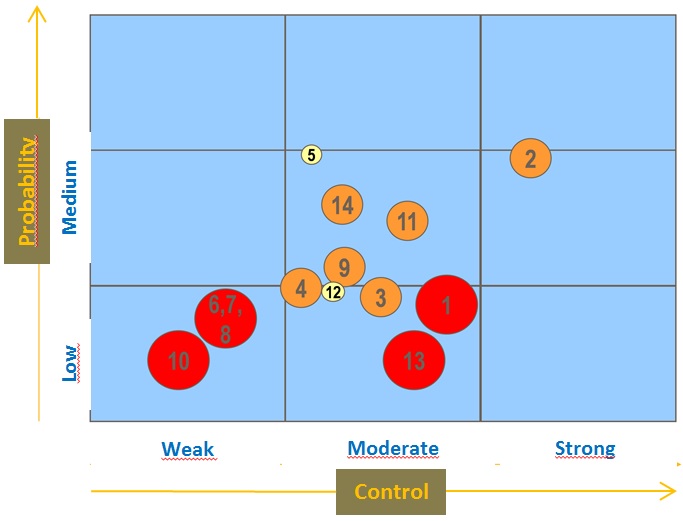 
Once the risk-assessment phase has been completed, treatment plans must be implemented to improve the profile of the risks identified. With this aim, measures have to be defined which operate two ways: to reduce the probability of occurrence, and the impact.

Particularly notable among measures influencing the likelihood of occurrence are recommendations for improvement driven by the risk audits of the business group’s plants. In natural risks, these may include the construction of protective barriers, reinforcements, etc. as shown below:

Clearly the installation of such measures is intimately related to greater demands in drafting construction standards for this type of risks. Moreover, their introduction is easier (and cheaper) at the plant design phase, hence the importance of being able influence from the initial phases of the project as pointed out above.

On the other hand, the most obvious of actions to mitigate impact, although not the only one, is insurance, either via public or private coverage systems as the case may be. Other significant measures are the so-called Contingency Plans which frequently make it possible to alleviate the economic consequences of one of these events by reducing the periods needed to resume activity.


Our policy of insurance in general and also for natural risks is guided by the following principles:

With that in mind, we contract reasonable insurance cover on the private insurance market or with public institutions to guarantee peak risk in each of country where we operate, including risks of loss of profit/loss of production. On some occasions, contracting other sorts of financial products, such as Cat Bonds or Swap Bonds may be considered favourably.

There are a number of questions concerning cover which must be kept in mind when taking the appropriate insurance:

There may also be debate as to whether inclusion of a hypothetical “error and omission” clause might be invoked by the party insured in cases of under-insurance like those described.
The following are other features of natural risk coverage which must be kept in mind when contracting this type of insurance:

It has been shown that many factors must be evaluated in taking insurance cover to reduce the impact of this type of loss. These questions are equally important for cover provided through public systems, including through the Insurance Compensation Consortium.

Public systems have in my opinion worked very positively, providing cover for disastrous natural events in reason premium conditions even at times of greater difficulty (following major loss events). However, and while that it is true, it is no less so, as I see things, that a certain tendency would be necessary to allow for greater individualisation of cost and cover according to the risk insured.

Thus the existence of a standard cost, whatever the nature of the risk insured, discourages the implementation of measures for treatment such as raised above; effectively, given that investment in preventive measures does not imply a reduction in the premium or even a change to the deductible applicable, the insured party’s interest in investing in such measures is substantially discouraged. I sincerely believe that the existence of premiums adjusted to the risk (including application of credits when appropriate) would send a clear signal to enhance the resistance of insured facilities.

I likewise consider that it should be possible to contract limits other than the general policy limit in line with each insured party’s real needs. This would encourage more exhaustive analyses of each party insured and, therefore, a better understanding of the risks to which it is exposed.


As explained throughout this document, adequate management of risks must also extend to natural risks. Just a proper understanding of them, their probabilities and possible consequences will make it possible to define suitable programmes for their treatment, including contracting public or private protection systems as the case may be.