The Ministry for Ecological Transition. 105 pp.

Gerardo Benito - National Museum of Natural Sciences, CSIC
Francisco Javier Sánchez Martínez - Directorate General for Water, Ministry for Ecological Transition
It is a fact that disasters and damage caused by flooding the world over have increased since 1970 and Spain is no exception. There are several components in the water cycle, such as rainfall and the thawing of snow, which are susceptible to modification as a result of climate change. Such modifications can imply a rising trend in the magnitude of floods in certain regions, involving changes in the locations affected and an increase in the reach of their hazardousness. There is currently great uncertainty about trends and future projections of how the climate will affect extreme flooding. The study of these future changes in the hazard level of floods represents a major technical and scientific challenge that European countries must take on throughout the second implementation of the Floods Directive.

The report bearing the title of “Floods and climate change: European studies and experiences in the first cycle of the Floods Directive”, recently published by the Ministry for Ecological Transition (MITECO, for the Spanish), consists of four sections that look at the state of the art in both scientific and technical terms and the findings from assessments of the change in hazardousness based on regional and local studies. The first section offers us the groundings for knowledge and presents existing scientific studies of the potential influence of climate change on the spatial and temporal patterns of floods, the impact they have and the chief options for adaptation. The second goes over the strategies for adapting to climate change applied by different countries during implementation of the initial cycle of the Directive, as well as the basic methodological lines advanced for implementation of the second cycle. The third part presents a methodological trial for a sample of five pilot basins (in areas of the Cantabrian, Guadalquivir, Júcar, Ebro and inner Catalonian basins) for sections identified as Areas with Potential Significant Flood Risk (APSFR). Lastly, a set of recommendations are given for including climate change in the Preliminary Risk Assessment PRA).

In analysing the flood readings at gauging stations, changes can be observed in the sequence of floods (magnitude and frequency) that may be attributed to climate change. Nonetheless, the trend seen in climate variables, such as maximum precipitation, exhibit a rise in frequency and magnitude in the Mediterranean basins and falls in the central and southern basins of the Peninsula. Some recent surges in the Mediterranean basin showed the largest peak flows in gauging readings. In mountainous zones, the thawing of snow has been found to appear sooner, while a decrease has been detected in spring peaks, with subsequent effects on the scheme for floods. Bouts of rain falling on substantial build-ups of snow or associated with phases of warm advection have stepped up the frequency of floods in the last two decades in the Duero and the Ebro basins.

Projections for Spain from European reports suggest increases in extreme winter precipitation (of between 5 and 25%), this being significant in sectors in areas of the Duero, Miño-Sil, Galicia Costa, Guadalete-Barbate and the Pyrenean side (left banks) of the Ebro basin and the inner basins of Catalonia. In the case of extreme rains (100-yearly), these should increase slightly in the Mediterranean, especially in certain areas of southern Valencia and Alicante (Figs. 1a, b and c).

The results in Spain show that economic factors, demographic growth and geographical factors are the main agents that contribute to the rise in the impact of floods. The most vulnerable regions are ranged along the Mediterranean coast, mainly due to flash floods that result from cut-off low situations.

With respect to the main options for adaptation, comprehensive plans are proposed to minimise damage based on enhanced house-building techniques and suitable infrastructure design, as well as boosting the role of flood plains, particularly as regards wetlands and sectors with annual crops, as zones for potential storage and abatement for controlling water levels in flood peaks.

The methodology used for a selection of five pilot APSFRs includes three key types of analyses and/or data: a climate model, a distributed hydrologic model and a hydraulic model. The dynamic projection was obtained from EURO-CORDEX dynamic modelling for the 2041-2070 period and a scenario of RCP (Representative Concentration Pathway) emissions of 8.5 (worst case). The sign of the change obtained for the precipitation variable is not in common among the various APSFRs in the pilot study, which shows the differences of changes one might hope for in different hydro-climactic areas (Fig. 1d).

Given that the goal of this second cycle of the Directive is to make a qualitative evaluation of the change in the flow system at basin level, later work has focussed on evaluating the change in precipitation extremes on a general level within the PRA. Such identification will enable future studies of the climate impact to focus on floods on the scale of APSFRs.

In reviewing the preliminary risk assessment, examination has gone into greater depth based on these studies so that, for each hydrographic area, different maps of the increase in precipitations are shown for RCP emission scenarios of 4.5 and 8.5 for a return period of 100 years, and a widespread increase in such precipitation has been detected in the coastal zones, especially in the Mediterranean. Likewise, an analysis has been made of the influence of multiple factors that can affect the risk of flooding, such as the variations in the degree of vegetation cover of the hydrographic basin, the increase in desertification, the existence of forest fires, etc., which reinforces the need to work on all these aspects to avoid the risk of flooding in Spain rising significantly.

All of these actions are similarly framed within the ADAPTA PIMA PLAN (Plans to Promote the Environment or Planes de Impulso al Medio Ambiente, PIMAs) for adaptation to climate change, financed by the Spanish Office for Climate Change. 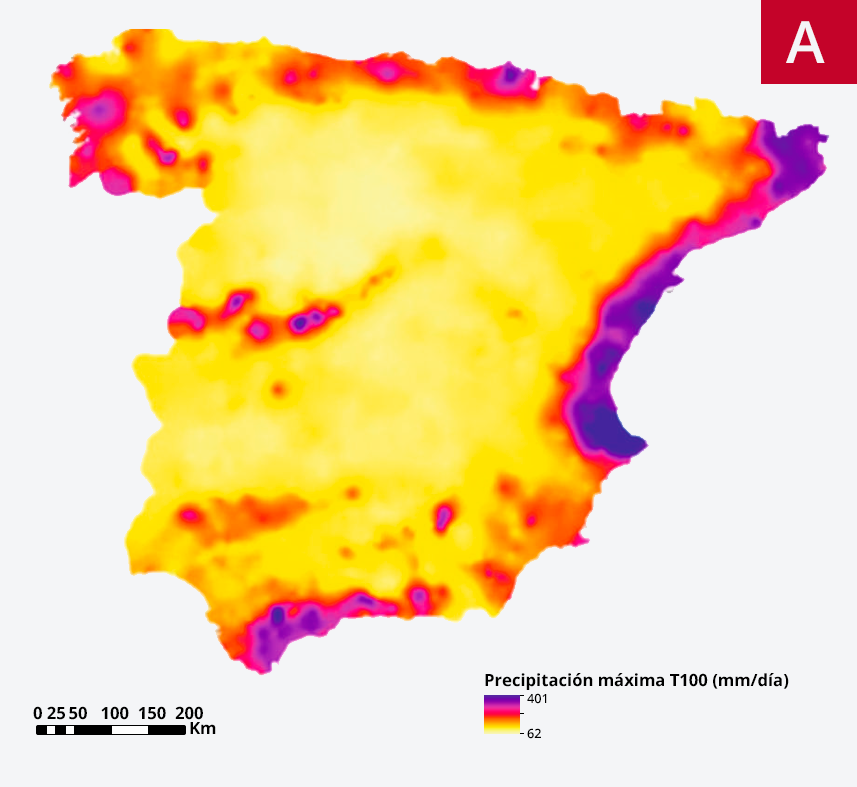 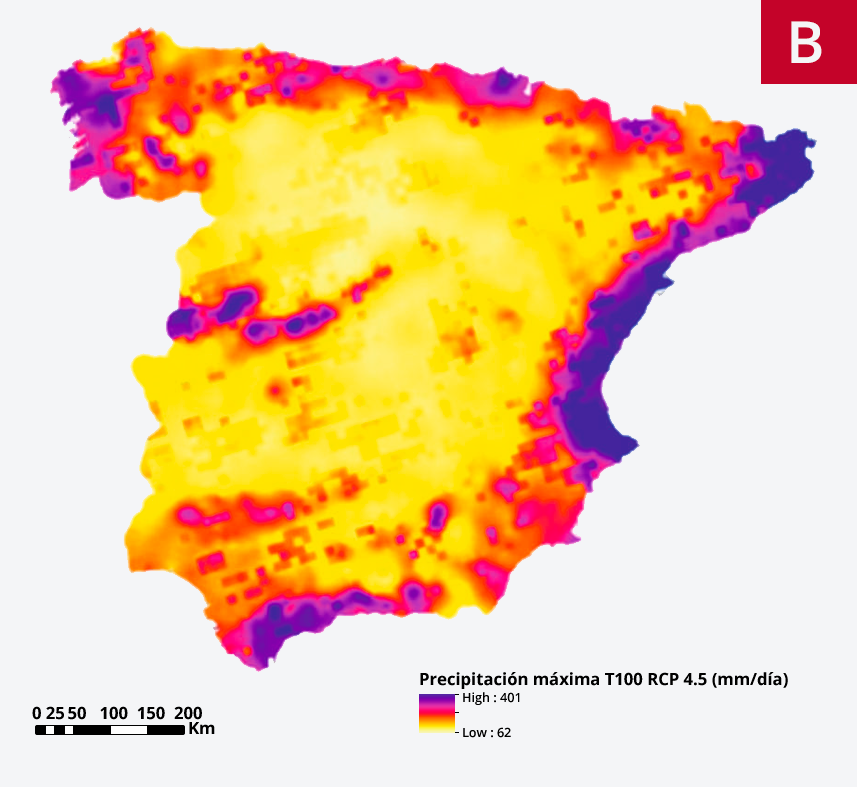 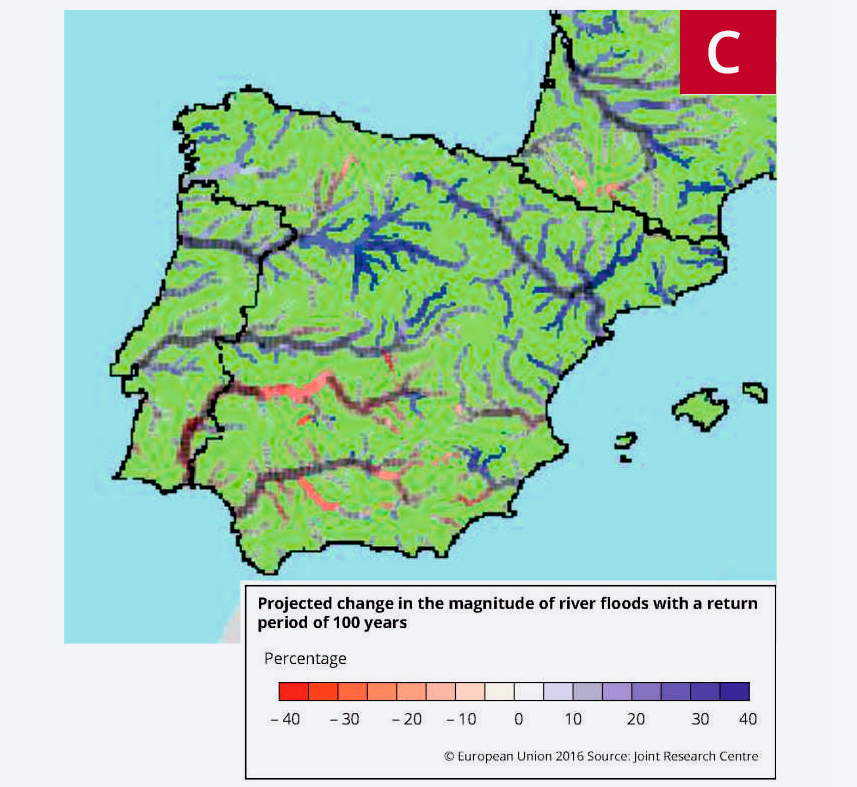 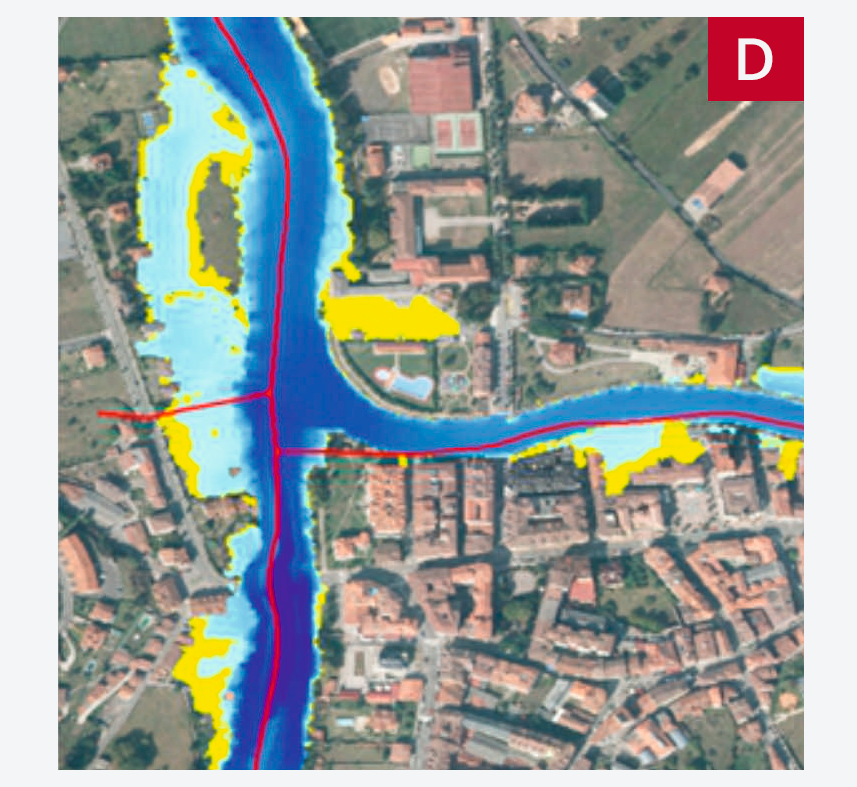 Figure 1. Results from studies by the MITECO of the effects of climate change on floods and maximum precipitations.

The report bearing the title of “Floods and climate change: European studies and experiences in the first cycle of the Floods Directive”, recently published by the Ministry for Ecological Transition (MITECO, for the Spanish), consists of four sections that look at the state of the art in both scientific and technical terms and the findings from assessments of the change in hazardousness based on regional and local studies.