Volcanic activity and insurance in Portugal

Saturday, 27 September 1958, Azores. The ground had been shaking non-stop for 12 days. Some 200 tremors had been recorded, none with an intensity higher than V on the Mercalli scale. Suddenly, at 6:45 a.m., the ocean started to boil about 300 metres off Capelinhos Point.

Activity increased over the next three days, with black jets of volcanic ash shooting into the air to heights of more than 1,000 metres and a cloud of water vapour reaching altitudes of over 4,000 metres. After a few days, the ejection of gases and pyroclasts decreased in intensity and was quickly followed by violent explosions that expelled projectiles of lava and released large quantities of ash into the air, destroying crops and forcing the population to evacuate the areas closest to the volcano, while torrents of lava spilled into the ocean.

Accumulating debris formed a small island that grew to 100 metres in height and came to be known as Ilha Nova, or New Island. In periods of calm the new island was eroded away by the ocean, and in the months when the volcano was active, new islets kept forming and then being washed away. 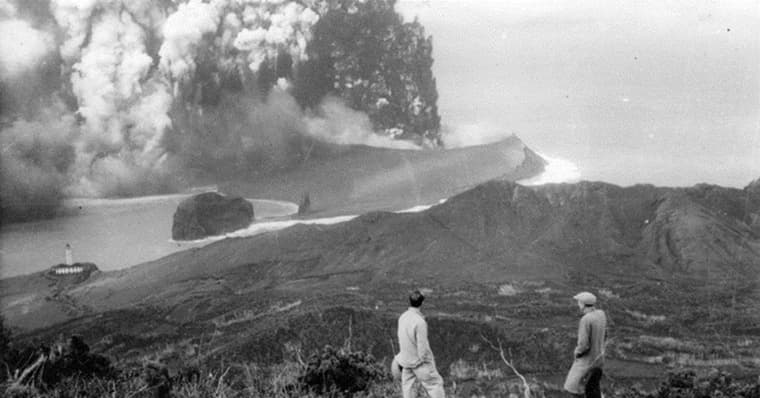 After erupting for seven months, a tongue of land opened up in the ocean at the eastern part of the volcanic cone, where fountains of incandescent lava could be seen shooting up various metres into the air.

Thirteen months after it appeared, the volcano started to lose strength, and the last effusion of lava took place on 24 October 1959.

This volcano, the Capelinhos Volcano on Faial Island in the Azores, is the one most inhabitants of the Azores and most Portuguese remember because of the destruction it caused and the wave of emigration it produced.

However, the last volcanic eruption recorded in the islands took place in 1998 off Terceira Island, near Serreta parish. This submarine eruption caused no damage.

Volcanic activity in the Azores

There are 26 active volcanos in the Azores, eight of which are submarine volcanoes. Only one of the nine islands in the archipelago, Santa María, does not have an active volcano. All the others have volcanoes that are currently dormant but could awaken at any time. There are no other volcanoes in Portugal.

Seismic and volcanic activity in the Azores is constantly monitored by the Centre for Seismovolcanic Information and Surveillance of the Azores [Centro de Informação e Vigilância Sismovulcânica dos Açores (CIVISA)] and by the Research Institute for Volcanology and Risk Assessment [Instituto de Investigação em Vulcanologia e Avaliação de Riscos (IVAR)]. They use three networks covering the entire island group, one for seismic activity, one for geochemical analysis of gases, and GNSS (global navigation satellite system).

There is no reliable information concerning transfer of the 1958 volcanic eruption in the Azores to the insurance market.

Like certain other European countries, Portugal does not currently have a special catastrophe compensation fund or specific covers for seismic damage. Despite various attempts along these lines, private insurance is the only coverage option available.

Property insurance coverage in Portugal typically includes property damage caused by volcanic eruptions under the category of seismic events and their repercussions, one being earthquakes. Lost earnings due to events of this type may be covered by business interruption insurance, which can be taken out together with seismic damage coverage.

It should be noted that purchasing seismic damage cover is optional in Portugal.

Premiums in the insurance market are priced on the basis of a specific rate set and recommended by the Portuguese Association of Insurers [Associação Portuguesa de Seguradores (APS)] according to the type of property insured, where it is located, and when it was built. Virtually no insurer operating in Portugal retains the bulk of its seismic damage exposure (and hence its volcanic damage exposure) in its portfolio but instead opts to transfer it to international reinsurance markets. Common excesses for earthquakes and volcanic eruptions stand at between 2% and 5% of the insured sum for each property exposed, which means that seismic and volcanic risks cannot be transferred wholly to the insurance, and the insured parties themselves have to bear part of the risk.

Unfortunately, as it is in the vast majority of insurance markets, the protection gap is quite large, made worse in Portugal by the low degree of insurance culture, the low perception of risk (even in the Azores), and low purchasing power. This last factor is aggravated by the fact that earthquake and volcanic eruption covers are considered to be quite expensive, since comparatively they may cost more than the other customary multirisk property insurance covers. It should be noted that there is no legal requirement to purchase seismic/volcanic eruption damage insurance covers.

In areas with the greatest exposure, like the Azores, many insurers, international insurers in particular, try to minimise underwriting seismic and volcanic risk covers as much as possible, above all for older buildings. The upshot is low penetration by seismic damage and volcanic risk covers and a sizeable protection gap, which could potentially be made smaller by establishing a seismic damage or volcanic risk fund based on a public-private sector association and making those covers compulsory.

Covers for natural events, a category that includes volcanic eruptions, can be purchased as part of car insurance, especially in the case of own damage covers, hence this national insurance line offers a broader product range and is more competitive. The same is true for personal accident insurance.

Property insurance coverage in Portugal typically includes property damage caused by volcanic eruptions under the category of seismic events and their repercussions, one being earthquakes. Lost earnings due to events of this type may be covered by business interruption insurance, which can be taken out together with seismic damage coverage.