Review of valuations of volcanic risk. How they apply to the La Palma event

That Law provided that one of the Consorcio's functions would be to serve as a compensation fund for non-personal risk insurance lines covering losses to insured risks produced by unusual or exceptional causes not covered by ordinary private insurance policies.

The Decree of 13 April 1956 approving the Implementing Regulations for the Law of 16 December 1954 stipulated that the 'extraordinary’ risks covered would explicitly cover volcanic eruptions.

Even though CCS has not had to face an event of this kind until now, in recent years a series of approximations into the cost that would arise in the event of a possible volcanic eruption event have been performed.

This study compares the three available approximations estimating the cost of damage from volcanic eruptions in Spain covered by the Fund with the projected cost of the current La Palma event based on updated data as of 11 December 2021.

The three valuations available to the Fund were prepared by:
The methodology used and the results obtained by each of these valuations are briefly described below.

"EXPANDED VALUATION OF THE ECONOMIC IMPACT OF CATASTROPHIC RISKS ON CCS", report from February 2014

The purpose of this study was to estimate the risk to CCS represented by its coverage of catastrophic events in Spain under the exceptional risk insurance scheme in terms of both expected loss rates and potential deviations to that rate and to assign a probability of occurrence.

The records on historical eruptions in the Canary Islands span 16 eruptions over the period from 1430 to 2012 (583 years) affecting La Palma, Tenerife, Lanzarote, and El Hierro. 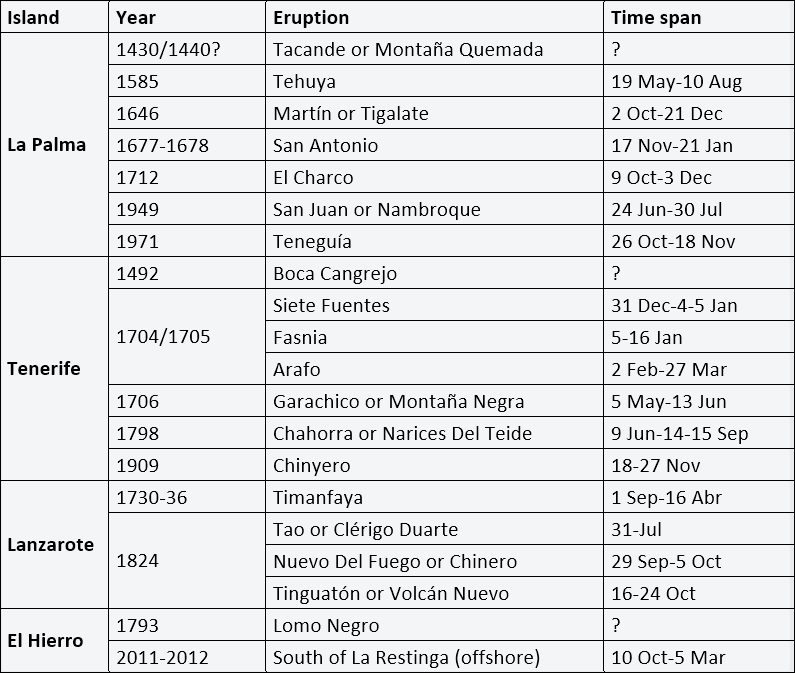 Reliable data on the damage caused by the various events being extremely hard to obtain, a historical simulation was run based solely on one extreme event, i.e., the Timanfaya eruption in 1730, which was assigned a return period of 500 years and an impact equal to the destruction of 50% of the insured property on the island of Lanzarote.

On that basis, it follows that quantification of the risk (Risk = Exposure x Vulnerability x Probability of occurrence) was:

The assessment results are set forth in the following Table, which compares the relative importance of volcanic eruptions to such other hazards as floods, storms, and earthquakes. 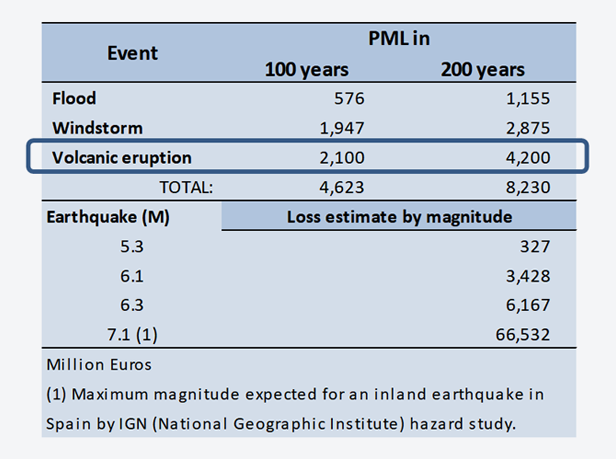 "GeoMEP: ASSESSMENT MODEL FOR LOSSES DUE TO GEOLOGICAL HAZARDS", report on the Canary Islands from May 2014

This assessment of volcanic eruptions was based on the premise of lava flows. A total of 14 scenarios were considered, all on the island of Tenerife.

No reconstruction or repair ratio was used for volcanic risk, because damage was assumed to be total and the cost equal to the assessed value of the properties plus contents in each of the selected scenarios.

Study assumptions: (i) 14 scenarios on the island of Tenerife were selected, all sharing the attribute of being areas with moderate to high vulnerability; (ii) the scenarios ranged from minor to maximum expected damage; (iii) all were considered to have the same probability of occurrence (threat level), not specified, hence there was no association between the loss rate and the return periods; (iv) exposure was restricted to each of the 14 scenarios, so vulnerability was 100% of exposure.

The results of this assessment yielded insured losses of between 0 and 5,504 million euros, depending on the area (scenario) concerned: 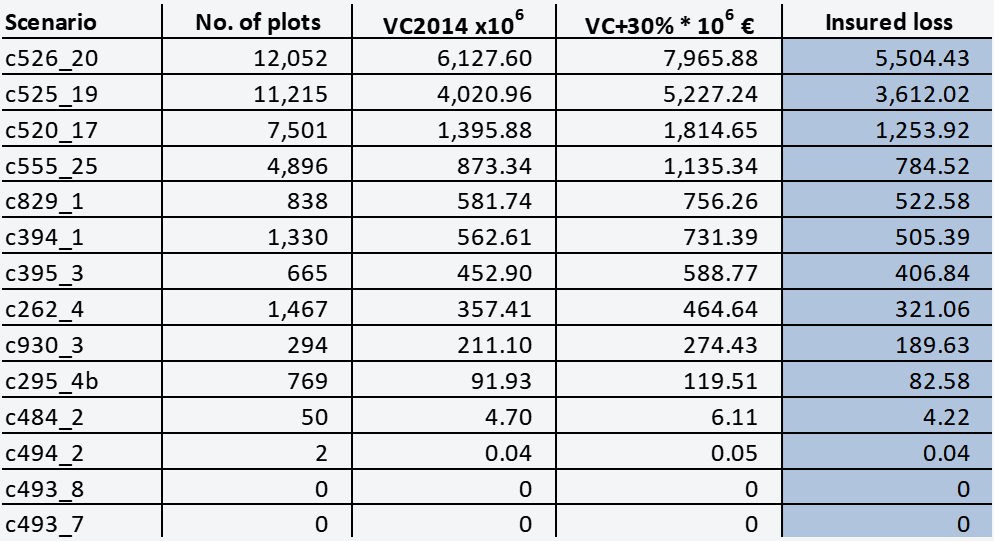 This study suggested that volcanic eruptions were a hazard that had not benefited from commercial modelling and classified it as the most dangerous of all the natural perils covered by CCS in terms of the ratio of losses to the exposed sums insured.

It was based on the following total exposure to volcanic risk in Spain in 2013: 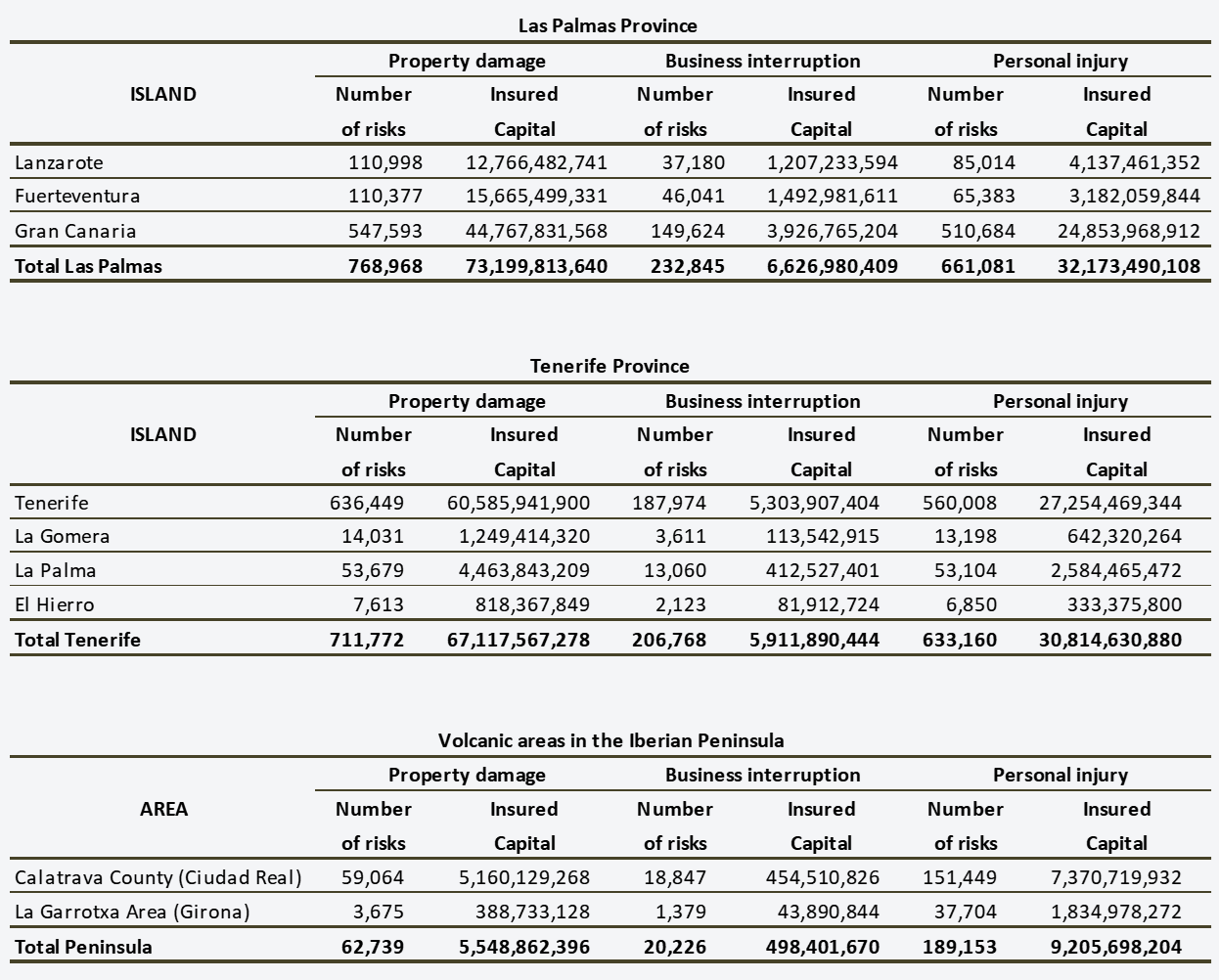 Accordingly, exposure to property damage and pecuniary losses (exposure of individuals was not contemplated) in Spain as a whole in 2013 came to around 160 billion euros.

External data taken from the Smithsonian Institution were used to ascertain frequency, as set out below: 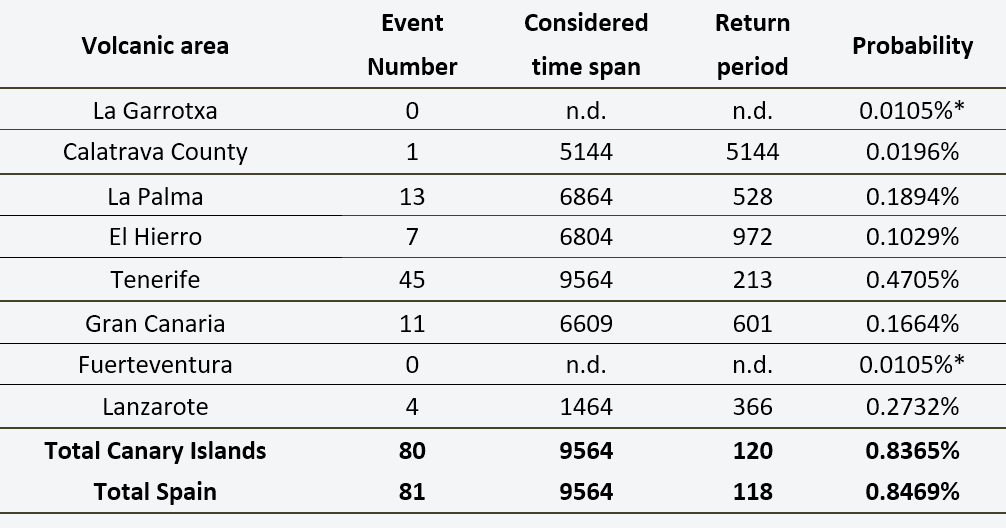 * For the volcanic areas of La Garrotxa and Fuerteventura, being no likely events documented, we apply a probability of at least one event in 9564 years (equal to the longest considered time span).

The Volcanic Explosivity Index (VEI), a scale of from 0 to 8, was used for vulnerability and yielded the following percentage values:

Table 7. Vulnerability according to the VEI.
Source: "CCS: AON Benfield risk assessment." July 2014.
The average for Spain was 2 on the VEI scale:

The following table sets out the results obtained by this study for all hazards for Spain as a whole by type of damage (property damage, business interruption, and personal injury). 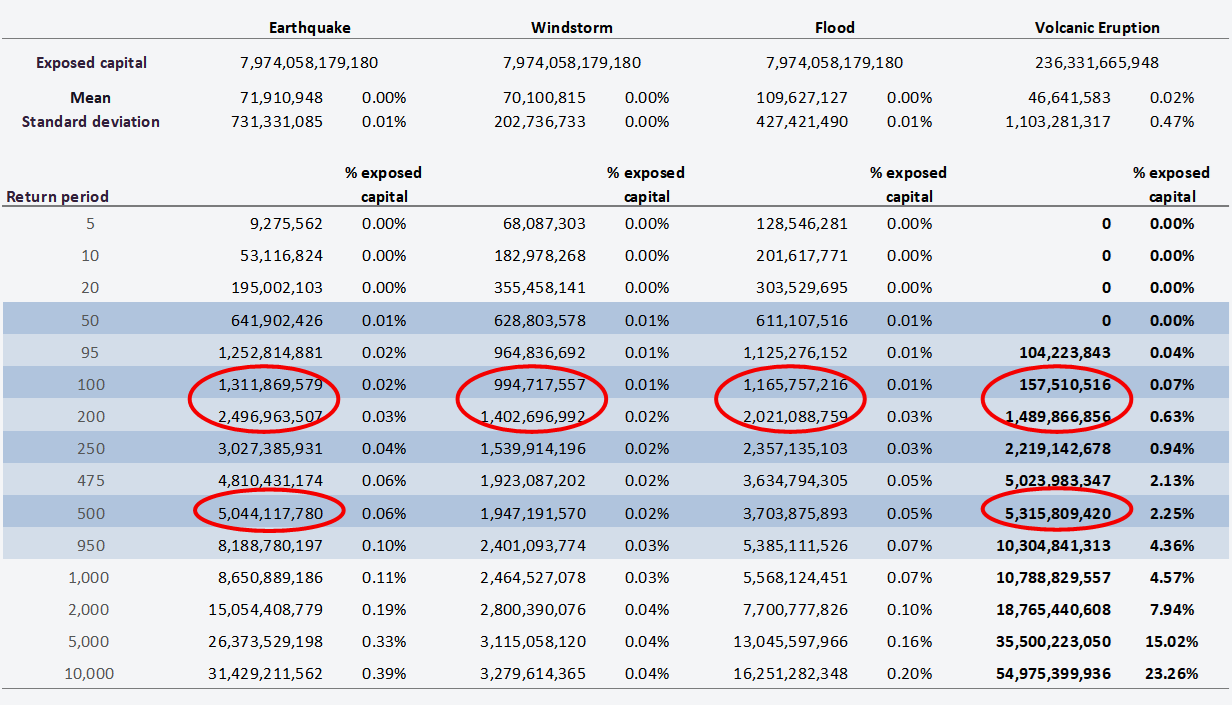 This Table describes the weight of each of the main extraordinary risks covered by CCS.

The loss data included personal injury, though as shown by the following Table, personal injuries caused by volcanoes are of limited consequence: 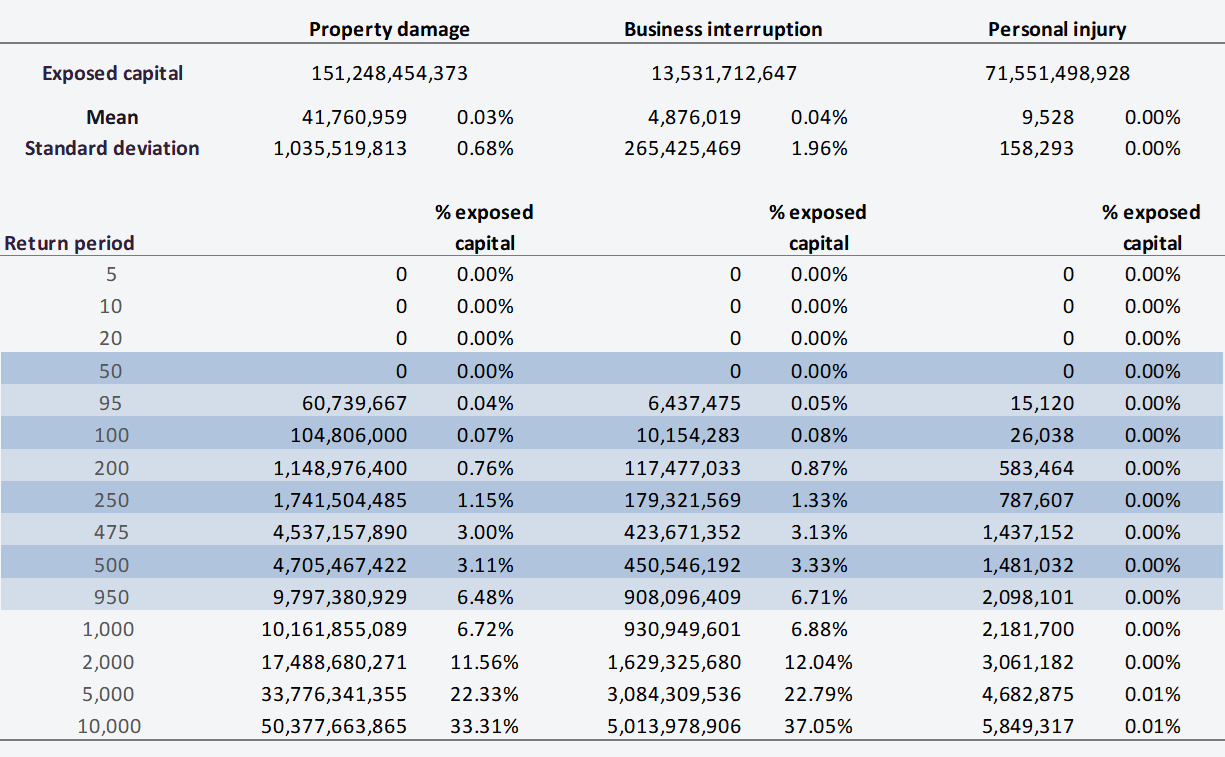 Data for the La Palma eruption in 2021

In this section are shown, separately, exposure data on the Island of La Palma, that is to say, the value of insured property damage and business interruption and, on the other hand, the currently known losses in property damage from the 2021 eruption process.

Actual loss on insured properties from the 2021 volcanic eruption in La Palma.

The expected loss for CCS from the eruption event of the last quarter of 2021 in La Palma, that at the moment of writing is showing clear signs of being near its end, after the information updated on 11 December 2021, comes to: 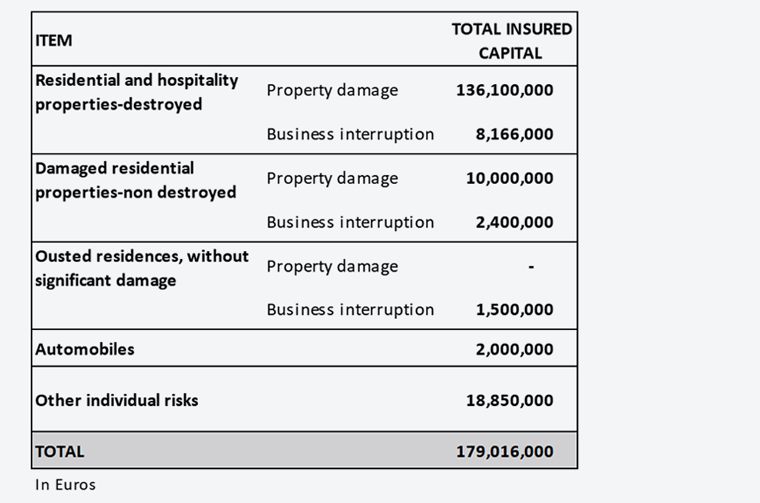 Table 11. Projected cost of the volcanic eruption on La Palma.

Property damage and pecuniary losses from risks not affected by lava flows, or business interruption losses from individual risks are not included, therefore the total cost for CCS is expected to be higher than this figure.