The Observatory also announced the establishment of the Annual Disaster Barometer, an original, innovative analysis presenting the statistical details of the disasters that have occurred in Spain during the previous year, to be drawn up by the Observatory itself.

Pedro Tomey, President of the Observatory, noted that "this is the first study of its kind produced in Spain, setting forth an analysis of the most important catastrophes recorded between 2016 and 2020".

The cost calculation included the impact on the budget, subsidies and aid, as well as repercussions on household economies and the agricultural sector.

By sector, the agricultural sector was hardest hit, accounting for 35% of the losses. Next were households, which accounted for 31.6% of the total cost. Budgetary appropriations for the Civil Defence Corps, the Spanish Emergency Military Unit, and the Red Cross plus subsidies and aid paid out by the Civil Defence Corps accounted for 4.13% of the total.

The cost of the catastrophes considered covered by insurance between 2016 and 2020 was 6,290 million euros, 41.3% of the total estimated cost, an average of 1,258 million euros per year. Insurance coverage in the agricultural sector represented 38.38% of the total, in the rest of the sectors coverage was 20%.

The report also included a special section on the economic impact of Storm Filomena in January 2021. Its economic cost was 1,157 million euros, of which 505 million euros were insured and the remainder uninsured.

Ranking of disasters with the highest economic cost

The ranking of disasters with the highest economic cost was topped by the cut-off low that occurred in Alicante and Murcia in September 2019, with an impact of 1,319 million euros. The next highest was the storm Gloria in January 2020 that covered all of mainland Spain, reaching a cost of 843 million euros. The third most expensive was the flooding and storms in southeastern Spain in December 2016, which did 272.72 million euros worth of damage. 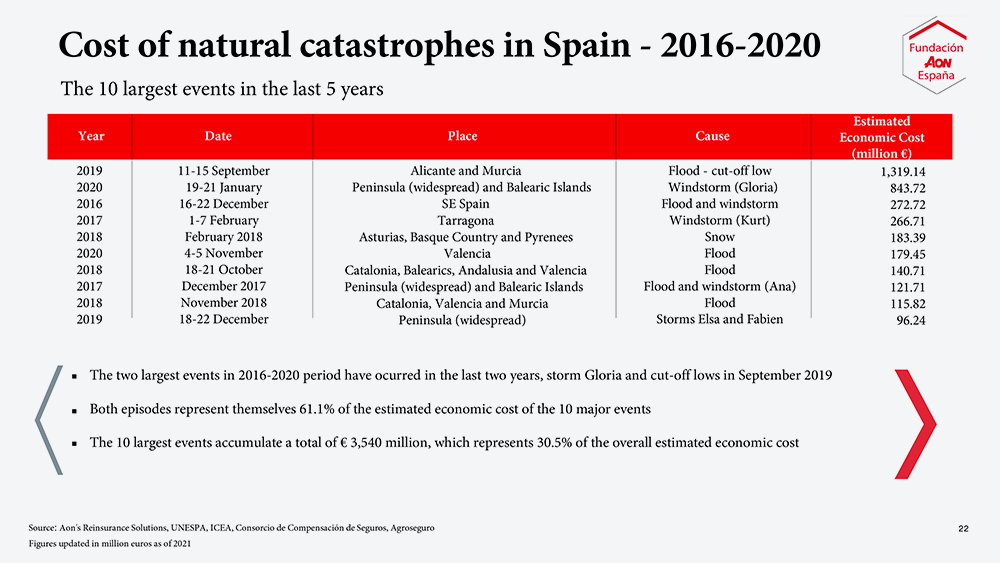 At the Symposium, José Antonio Martínez Páramo, General Coordinator of the Environment Area for the Madrid City Council, said that 1.25 million tonnes of snow fell over 30 straight hours. "Also, an additional 9,000 tonnes of waste that could not be picked up by refuse trucks piled up in the streets while traffic in the city was completely shut down. The underground was the only transportation we could use, and it was an escape valve", he added.

There are five million trees in Madrid. In all, 1.7 million of them are cared for by the City Council, and 800,000 of those were damaged by Storm Filomena. In the end, 80,000 could not be saved and had to be cut down. The cost to the city government was 46 million euros for tree management alone, 30 million in the Casa de Campo Park.

Pedro Tomey, President of the Catastrophe Observatory, announced the creation of an Annual Disaster Barometer for Spain to quantify the impact of disasters and to compile and organise criteria with a view to being able to implement preventive measures, respond appropriately, and mitigate damage.

The new Barometer will inventory catastrophes and draw up metrics concerning the socio-economic impact of disasters, their repercussion on critical infrastructure, the personal injuries and material damage they cause, their impact on the most vulnerable populations, and resilience. In Tomey's words, "This Barometer will be the first of its kind in Spain and will help bridge the statistical and analytical gap in disaster studies extant in Spain, thus giving society new tools to protect itself from catastrophic events and mitigate their impact. Thanks to the new Barometer, we will be able to develop a severity-based classification for catastrophes and design a full map with a focus on the most critical locations".

The new Barometer will be backed by a Scientific Committee to choose catastrophes based on parameters to be set by the Committee itself, draw up questionnaires and conduct surveys, select and assess data for each disaster collected from designated sources, follow up metrics with participating institutions and organisations, oversee the work carried on by researchers and consultants, validate conclusions, and if appropriate, join in any public presentation of the Barometer.

Representatives of Aon España Foundation, Aon Reinsurance Solutions, the Analistas Financieros Internacionales (Afi) firm, Agroseguro, Consorcio de Compensación de Seguros, Spain's Engineering Institute [Instituto de la Ingeniería de España], and the Catastrophe Studies Programme (Comillas Pontifical University and the University of Navarre's Tecnun School of Engineering) will all be members of the Scientific Committee. There will also be an Advisory Committee composed of the First Responders that are members of the Catastrophe Observatory, the Civil Defence Corps, the Spanish Red Cross, and the Spanish Emergency Military Unit.

During his presentation to the Symposium concerning the volcanic eruption on the island of La Palma, Alejandro Izuzquiza, the Director of Operations of CCS, reported that «2,300 claims for compensation have been received and 50 million euros have already been paid out». CCS estimated that the total payout will come to more than 95.5 million euros. Izuzquiza pointed out that the extent of insurance coverage on La Palma is rather low.

He explained that the following criteria were used to process insurance claims:

Disasters and the Civil Defence Corps

Francisco Ruiz Boada, the Civil Defence Corps' Deputy Director General of Prevention, Planning, and Emergencies, reported that «the catastrophic event management system has tallied 4,253 events to date in 2021, compared with 849 in 2020 and 1,012 in 2019, in other words, the growth curve is becoming steeper». The highest risks in 2021 were seismic activity, with 494 cases, and forest fires, with 579 cases. He noted that the National Civil Defence System «is cognisant of the need to be prepared for evolving, cross-cutting emergencies» and underlined that in the case of disasters, «rather than diverging, the competencies of the national and regional governments complement each other».

He also stressed the need for policies that will more fully inform the population and raise self-reliance and that the National Prevention Network has put in place a National Response Mechanism to address this.

Íñigo Vila, Director of Emergencies of the Spanish Red Cross, reported that the organisation's work on the island of La Palma was proceeding in a highly professional manner and that «events like the Cumbre Vieja Volcano should help raise our awareness that civil defence starts with each of us as individuals».

The Spanish Emergency Military Unit and the La Palma volcano

Lieutenant-Colonel Jorge Serra Llopart reported that 239 soldiers, 75 vehicles, and 4 drones have been deployed for the operation in response to the La Palma eruption. The Unit's mission has been to provide support and coordination for the emergency management authority, carry out reconnaissance flights, monitor the progress of lava flows, measure air quality, take samples, provide support for evacuations, help move belongings, and remove ash.

Volcano monitoring and warnings in the La Palma eruption

Carmen López Moreno, Director of the National Geographic Institute's Central Geophysical Observatory, spoke on managing volcanic emergencies: «There have been 13 eruptions in the past 500 years, and La Palma was the island that was most likely to undergo an eruption». She added that, «The problem is not explosivity or the size of the eruption, the eruption has not been particularly large. The problem is that it has taken place in a heavily populated, prosperous area located some distance from the ocean. In this respect it is unlike the Teneguía eruption in 1971, which flowed directly into the ocean and did little damage. This time there were homes located quite near to where the eruption started». In her opinion the preventive measures that had been taken had made it possible to evacuate the population and «had been a great success».

«Shortly before the eruption started, we were able to predict where it would take place, and we have not suffered any loss of life, only economic damage and the misfortune of losing one's home and livelihood». 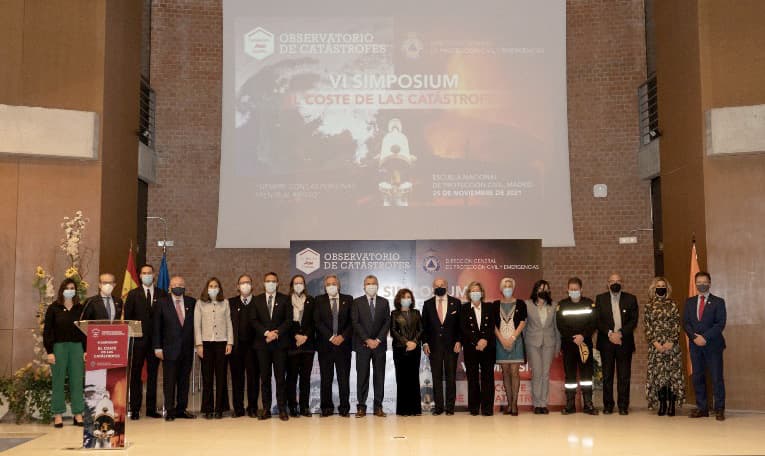 Qualitative evaluation of the effect of catastrophes on critical infrastructure: The case of Storm Filomena

«There was a cascade effect that ultimately affected infrastructure in a number of ways», said Marcos Borges, Professor at the University of Navarre's Tecnun School of Engineering, one of the headquarters of the Aon España Foundation's Catastrophe Observatory. «Transportation infrastructure was most affected, highways were made impassable, vehicles were abandoned, the food supply was impaired both at its source and by being unable to reach consumers. Many streets were blocked, doctors had trouble reaching their workplaces, ambulances were unable to pass», he reported.

At the border. Migrations forced by climate change


The ranking of disasters with the highest economic cost was topped by the cut-off low that occurred in Alicante and Murcia in September 2019, with an impact of 1,319 million euros. The next highest was the storm Gloria in January 2020 that covered all of mainland Spain, reaching a cost of 843 million euros. The third most expensive was the flooding and storms in southeastern Spain in December 2016, which did 272.72 million euros worth of damage.