Chile's economic recovery after the earthquake of February 2010

If the 2010 earthquake in Chile, the terrorist attacks of 11 September 2001 and Hurricane Katrina have anything in common apart from their catastrophic nature and the unlikelihood of occurring, it is that the search for the best way to manage their consequences is the main focus of the Wharton Center for Risk Management and Decision Processes at the University of Pennsylvania. 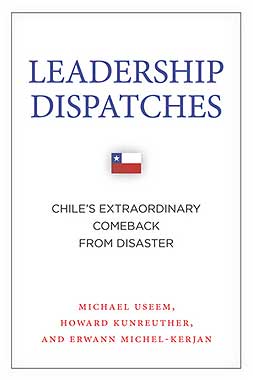 Two of its members, specifically its Co-Director, H. Kunreuther, and its Executive Director, E. Michel-Kerjan, along with Professor M. Useem, Director of Wharton's Center for Leadership and Change Management, recently published a book on the earthquake: "Leadership dispatches. Chile's extraordinary comeback from disaster". The book tells how the country, facing one of the worst natural disasters its inhabitants had ever experienced, was capable, with the cooperation of the entire population and the nation's business infrastructure and with very effective management by political leaders, of recovering economically in a relatively short period time, becoming a role model for the effective handling of natural disasters.
The authors, whose professional occupation consists of analysing the performance of the people and official institutions with decision-making authority in extreme situations and determining which strategies can be applied to increase the effectiveness of risk management, use the Chilean earthquake as an example which illustrates how recovery after a catastrophe should be handled.

Following a thorough documentation process (including interviews with the actors and visits to the affected areas) the authors recount the history of Chile's quick recovery after the 2010 earthquake with the didactic intent and practical vocation common in American authors.
The facts can be summarised as follows: the earthquake, a magnitude 8.8 Mw, happened in the middle of a summer night as Chileans slept. The focus was located at a depth of 30.1 km under the earth's crust. It lasted up to 4 minutes in areas near the epicentre and more than 2 minutes in the capital. Around 80% of the population lives in the areas most heavily affected. The earthquake released so much energy (equal to 100,000 atomic bombs like the ones dropped on Hiroshima in 1945) that the country was paralysed for weeks, with 533 deaths and more than 2 million people affected, disrupting communications, razing entire cities, destroying roads, hospitals, schools, homes and businesses. Only 35 minutes after the earthquake, and as a direct result of it, a magnitude 8.3 Mw tsunami that went undetected by monitoring services devastated the Chilean coast, destroying several towns that had already been affected by the earthquake. The total economic losses accounted for 18% of Chile's GDP.
Unfortunately, the earthquake occurred just days after the Prime Minister, Sebastian Piñera, had won the elections, with the outgoing cabinet members in their acting role and the new team of ministers not yet officially appointed. In a shaken country with a battered economy and no reserves available to deal with 30 billion dollars in losses (a figure that would be equal to US$ 2.7 trillion if measured in proportion to GDP), the President put a team of people in charge without much political experience but with good management skills and a commitment to the people to complete the reconstruction process in four years. Funding for the recovery came from a variety of sources, mainly the compensation paid out by Chilean insurers, international reinsurers, government grants and private donations and was supported by widespread mobilization of civil society.
Surprisingly, just one year after the disaster the Chilean economy was growing by 6%, as the world economy was still reeling from the effects of the financial crisis of 2008-2009. The management of the crisis gained international recognition: the OECD made Chile a permanent member in 2010 and it was one of the countries invited to participate at the G20 summit held in Mexico City in 2012.

In 221 pages, the book examines the keys that facilitated the recovery, the people who were in charge and how they exercised leadership, what decisions were made and how they were put into practice. The earthquake serves as an example throughout the book for analysing the leadership strategies and actions required to take control in national emergencies. The recommendations are summarised on tables for easy access and consultation. It is noteworthy that the authors focus on the positive actions taken by the Chilean government, leaving the errors aside.

At the end of each chapter there is a checklist of the actions that people in charge of an emergency of this kind should implement. In the insurance field, the recommendations are obvious: encourage people to insure themselves against catastrophic risks and advise local insurers to use international reinsurance to ensure prompt payment of benefits and thereby save the population from having to resort to government aid, to the extent possible.

The book ends with the "ten commandments" for leading the recovery after a major catastrophe and a list of "mistakes to avoid at all costs" drawn from the Chilean experience.

Surprisingly, just one year after the disaster the Chilean economy was growing by 6%, as the world economy was still reeling from the effects of the financial crisis of 2008-2009. The management of the crisis gained international recognition: the OECD made Chile a permanent member in 2010 and it was one of the countries invited to participate at the G20 summit held in Mexico City in 2012.